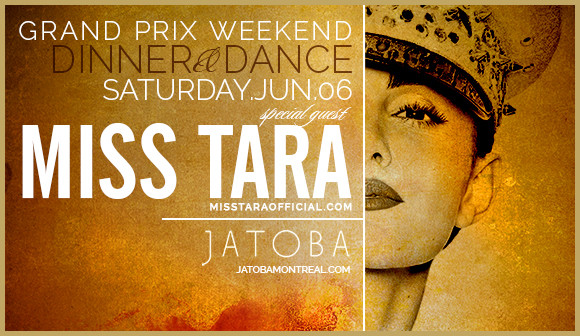 Miss Tara was playing music for the 6th June dinner and dance party held at Jatoba, Montreal. She was also the special guest for the 7th of June, at Harlow for a warm up party titled Brunch Baby Brunch! And the main event, The Grand Finale for the official closing party for the Canadian Grand Prix.

The Canadian Grand Prix left the race tracks of Montreal simmering and screeching, with formula cars racing fast and vicious to grab the first place and win the Grand Prix and its trophy. Of course the party only gets harder after that, what better way to celebrate the victory than a good night out? DJ Miss Tara was the special guests for the commencing party for the Canadian Grand Prix.

The party titled ‘Dinner and Dance’ was held on Saturday, on the sixth of June. In the cozy and warm interior of the coolest new restaurants in Jatoba located in Montreal, the capital and Heart of Canada. Atthe center of it all was the maestro and the chosen special guest for the dinner, DJ Miss Tara who knows how to accommodate the excitement and joy of watching the Canadian Grand Prix. The most star studded attendance and the elite enthusiasts from not only Canada itself but the world over joined DJ Miss Tara to enjoy the dinner and relish themselves with the best meals before the Grand Prix finale.

DJ Miss Tara is well accustomed to the sounds of preparing a crowd for a good time, and it is well under her experience within the music landscape that allows her to play to either a mellow and tame crowd or a wild frantic one. The summer of June, the speed of the machines, the sound of cars breaking pas t the picture that our vision allows, and the smell of burning tires. All these sensations are unique and particular to the Canadian F1 Grand Prix and should be celebrated as much as they are contested.