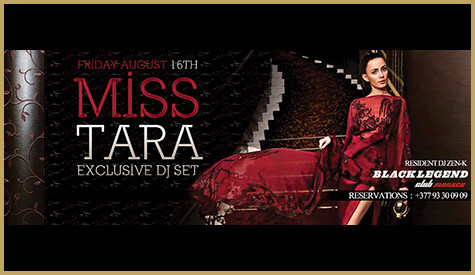 Miss Tara is a well recognized and international know DJ touring in Europe and has been well know music DJ that regularly plays in Monaco. Monaco is well known across the world as the meeting point for many tourists across the world.

Many night clubs usually organize gala dinner for their guests with a show featuring top music DJs across the world. Miss Tara was the point of attraction at Black Legend Night Club Monaco, part of Groupe Floirat that also owns Les Caves du Roy night club at the Byblos in Saint Tropez. It was a spectacular appearance so to say. The audience was held spell bound by the spectacular performance of Tara Mobayen who is popularly called Miss Tara by her numerous admirers across the world

There is no any iota of doubt that Miss Tara as a jetset DJ, plays a great set of house music as it has been evident in all her previous appearance across the world. DJ Miss Tara is an iron and determined lady that has stood up to male colleagues in the music DJ industry.

Miss Tara is a great performer. She has always have her venues filled up to the brim with a strong base of fans following her no matter in which country she plays