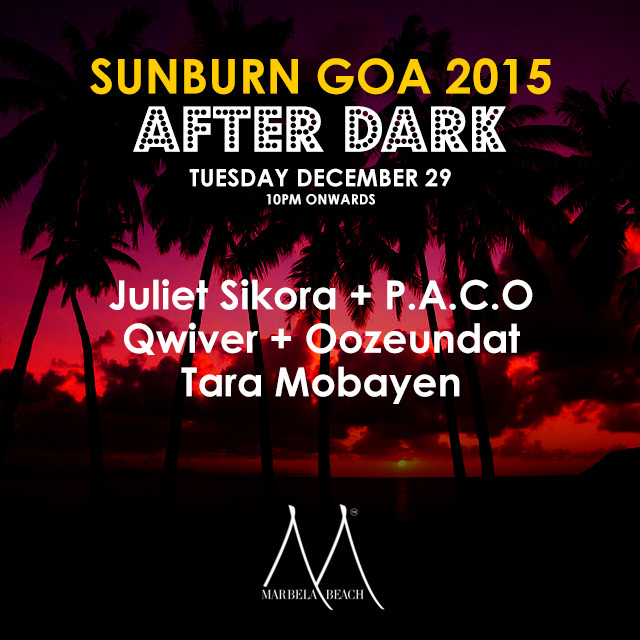 Tara Mobayen Sunburn Goa After Dark India Dec 29 2015
Tara Mobayen with her Underground Tech House specials…Sunburn Goa After Dark Marbela Beach
Before going on the mainstage of Sunburn Festival Miss Tara changed her outfit for an Underground set under her own name Tara Mobayen at the Marbela Beach in Goa
Fans grooved to Tara’s tracks from her yet to be released double album as she played an Underground Set at Sunburn 2015- After Dark at Goa on 29th December, 2015.
Party-goers at Sunburn 2015-After Dark did have the time of their lives as they head-banged to glory to Tara Mobayen’s Underground set list. From the night of the 29th December till the wake of 30th December, 2015, fans at the Marbela Beach in Goa danced to the award-winning Canadian DJ’s tracks from her yet to be released 2016 double album – ‘Let’s Live’. As a part of the 4 day festival which kicked off on the 27th of December, 2015, Goa’s Sunburn 2015 featured Miss Tara and other top artists like Dimitri Vegas, Like Mike, Kygo and David Guetta.
Specializing in the genre of Electronic Dance Music, Miss Tara ensured that her frenzied fans could let their hair down and keep jumping to her Electro, Tech House and Progressive beats. With her discography ranging from ‘Hot Blood’ to ‘Runaway’, Tara Mobayen, a top force in the Canadian DJ circuit, is now mastering the Underground culture, which she calls her roots. As a member of the ‘American Society of Composers, Authors and Publishers’ (ASCAP), Miss Tara has already identified herself as a serious industry musician.
Miss Tara’s Underground set, which set the floor on fire at Sunburn 2015 After Dark in Goa, showed her prowess in the field of electro-heavy dance music and proved where her art truly thrives – in the Underground music culture. What was remarkable about her performance in Goa was her enthralling stage presence, the way she interacted with the crowd and the quality of tracks she played from her set. The internationally acclaimed Tara Mobayen has now done numerous shows across the globe and shall soon release her double album – ‘Let’s Live’, in 2016. To know more about Miss Tara / Tara Mobayen and her upcoming shows, music, fashion and albums, one can visit www.misstaraofficial.com.
About Miss Tara (Mobayen) –
Award winning Canadian house music DJ and chart topping producer Tara Mobayen, aka Miss Tara, delivers a signature blend of upfront crowd-pleasing electro-heavy bangers and uplifting melodic anthems. Supported by a huge cult-like global following, her dynamic and engaging sets are in-demand by iconic brands including Sunburn, Universal Music Group, Nikki Beach, Armani, Playboy, Escada, Toronto Fashion Week and renowned venues around the world. Miss Tara’s breakout single “Hot Blood” off Miami based label Bonnies Records was one of Beatport’s top 10 tracks. Her second release “Runaway” was a #2 Beatport Electro House hit and reached #3 overall.